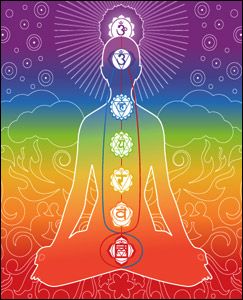 There is a universal life energy that is our source of life. It has been spoken of, written about and identified for over 5,000 years. This universal life energy emanates from, surrounds and penetrates our bodies and has been scientifically measured to show definite colours and frequencies. This energy has been called many names-“magnetism” in the early 19th century by Mesmer. The Yogic name for it is “prana.” In Taoism and acupuncture, it is known by the Chinese term “chi” or “qi” (Japanese “ki”).

Each theory of healing has an explanation for the nature of human difficulty and disease. In this theory, for a multitude of reasons, life-energy readily becomes blocked in human beings. The channels through which it flows can be stopped up, weakening the energy in one part of the body, whilst building it to excessive levels in another. Energy can become blocked in our bodies from depression, trauma, unexpressed emotions and tension. When there are blocks, our energy cannot move freely and this may cause disease. When our energy is flowing freely, we have a sense of well-being and better health.

This approach to healing is based on the view that a special energy moves through all things-a life energy that is the creative impetus for the universe, for all matter, and for the moment-to-moment feelings of each human being. This energy moves in pulsating rhythms that make up the seasons, the stages of the life cycle, the developmental phases of growth, the tidal rhythms of breath, the drumbeat of the heart, and the vibratory dance of the smallest particles inside each cell. Seen in terms of energy, the body consists of

Life-energy may be released and rebalanced through a number of means. Acupuncturists use needles, pressure, and the precise application of heat to balance the flow of “chi” through elaborately mapped pathways called “meridians.” Applied kinesiology and polarity therapy rebalance the energy through precise touch. Tai chi and chi gung build, release, and balance life-energy through elaborate, gentle movements and prescribed postures. Hatha yoga uses physical postures, breathing, and diet to balance the centres of prana. Reichian therapy and bioenergetics release blocks and cultivate the ability to experience the fuller flow of organismic energy. Reiki and therapeutic massage manipulate muscles and move energy with the hands, not to remove muscular tension in a mechanical sense, but to clear the deep energy pathways of the body.

In the ancient method of the laying on of hands, healing energy is transmitted from one person to another by touch, to reenergize or rebalance the afflicted part. The energy of healing hands can also be transmitted to others at a distance, and it can be transported by means of charged objects or a glass of charged water. Perhaps the most direct method for cultivating life energy is through working with the breath, breathing in pure energy, breathing out blocks, inhaling the energy into special centres, breathing it from there into all parts of the body. Breath exercises can be found in yoga as well as many recent healing methods.